Mercury, Venus, Earth, the Moon, and Mars are all dramatically different in their geology. The crusts of these planets are especially interesting, Crusts are what we see when we actually look at the planets and, with the exception of Earth, are the only regions that are directly accessible and able to be sampled. Numerous geologic processes have shaped and altered planetary crusts, from magma ocean crystallization to crust-building magmatism to intense impact bombardment. One of the primary goals of my research is to use planetary samples and experiments to unravel the processes that have built and altered planetary crusts.

The Moon
My research on the lunar crust has focused on how the crust has evolved through time, and I've studied some of the oldest crustal rocks and also some of the youngest. One of my main interests is the Magnesian Suite (or Mg-suite), which is a series of ancient mafic cumulate rocks thought to have formed layered intrusions very soon after the lunar magma ocean finished cooling. The Mg-suite are some of the best preserved rocks from the ancient lunar crust. My work on determining how the Mg-suite formed, whether it is globally distributed, and how it connects to mantle processes is ongoing, and I currently have a 3-year NASA Solar System Workings program grant funded to continue this effort. I have also studied the youngest sampled additions to the lunar crust. Three basaltic lunar meteorites have ages of ~3 Ga and record evidence of convection processes in crustal magma chambers as well as the compositions of mantles sources melting after much of the Moon had already cooled. 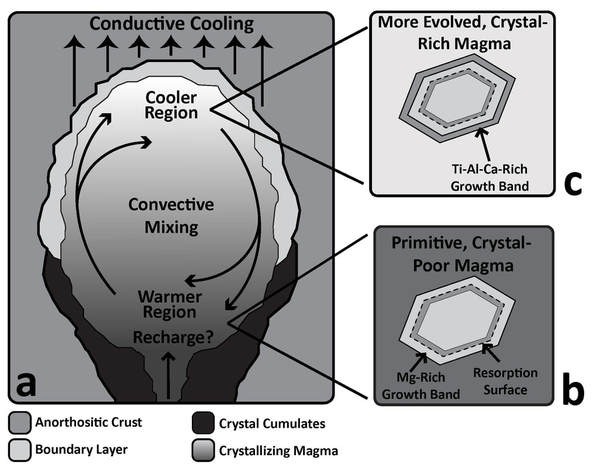 Mars
The martian crust is fascinating, as it is the only other place in the Solar System besides Earth where we find a mixture of igneous and sedimentary rocks. In 2013, I was part of the team that discovered the meteorite (NWA 7034) that turned out to be the first sedimentary meteorite from Mars. This rock contains numerous igneous components from various time periods in martian history and gives us perhaps the best representation in sample form of the global crust. In a follow-up paper, we documented the hydrothermal processes and lithologic diversity present in NWA 7034. Additionally, along with my long term collaborator Francis McCubbin, we conducted a thorough study of two of the classic martian meteorite groups, the Nakhlites and Chassignites, and showed for the first time that these samples are derived from the same layered intrusion in the martian crust. We also showed crustal fluids interacted with and changed magmas in the crust.

Mercury
Mercury is perhaps the biggest oddball among the terrestrial planets. Compositional data from the MESSENGER spacecraft have shown it is the most oxygen-starved planet in the Solar System. These highly reducing conditions lead to unique geochemical features and mineralogy. In a study lead by my collaborators at NASA Johnson Space Center and elsewhere, we argue that the extremely low O/Si ratio observed in the crust of Mercury is indicative of a smelting reaction whereby graphite in the crust reduces SiO2 in magmas to Si metal. The C-O gas species produced are then lost to space, leaving the crust highly reduced, Fe-poor, and with a very low O/Si ratio.