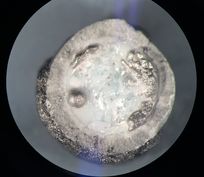 Microscope view of a metal-silicate run product prior to phase separation.
Iron, as one the most abundant elements by in the bulk Earth and one that occurs in all major geochemical reservoirs from core to crust, preserves primary information about the accretion and differentiation of the rocky planets. It naturally occurs in three oxidation states and in different bonding environments in planetary materials, which offers the opportunity to exploit fractionations among its three stable isotopes to learn about geologic processes and conditions. The iron isotope compositions of planetary samples are surprisingly variable, and this variability is not easily explained within the context of our current understanding of iron isotope behavior. The main goal of this area of my research program is to use high-pressure and -temperature experiments designed to  measure iron isotope fractionations in combination with the iron isotope compositions of planetary materials to study the formation and differentiation of the terrestrial planets.

Using isotopically-spiked metal-silicate experiments in a piston cylinder apparatus, I simulated the conditions of core formation in the smaller rocky planets. After separating the metal from the silicate, I used high-resolution MC-ICP-MS analyses to determine mass-dependent iron isotopic fractionation factors between planetary cores and mantles. My results show that fractionations of iron isotopes during core formation are tied to the abundances of other elements that enter the core.
But not every element has the same effect. Elements like carbon, which fit into the interstitial sites between iron atoms in the metal structure, do not cause iron isotopes to fractionate. But elements like sulfur, nickel, and silicon, which substitute for an iron atom in the structure, cause a fractionation that makes planetary mantle isotopically light. This unexpected result demonstrates a structural mechanism for explaining why some metal impurities cause iron isotope fractionation and other do not. My results in this ongoing study show that these fractionations result in the mantles of the smaller planets becoming isotopically light compared to chondrites and Earth’s mantle. When we combine these predictions of isotopically light mantles in the smaller planets with the fractionations that occur during silicate differentiation and mantle partial melting, we can explain the full range of iron isotope compositions in planetary samples.