The Magmatic Evolution of Planetary Mantles

Planetary mantles make up by far the most massive portions of terrestrial planets. Because of this, their initial states, composition, and dynamic evolution dictate how planets evolve geologically. Although direct access to planetary mantles outside of Earth's through samples and seismology is practically or completely non-existent, the geochemistry of igneous rocks, the products of partial melting of planetary mantles, offers an enormous amount of information about the composition of planetary mantles and how they've evolved over 4.5 billions years.

The LMO and Formation of the Mg-Suite
The Moon is the best sampled planetary body other than Earth. Much of my lunar research is about understanding how the lunar mantle differentiated during the magma ocean phase, how it produced magmas immediately after that differentiation, and what factors contributed to how the Moon's mantle melted late in lunar history. In 2011, I published the first experimental simulation of lunar magma ocean crystallization, with an emphasis on how the composition of the early cumulate pile relates the first post-LMO intrusive magmas of the Mg-suite (pictured below). I proposed a model for these magmas where in the whole-mantle convection thought to occur due to density instabilities in the post-LMO cumulate pile causes hot, deep mantle dunites to rise to the base of the crust, interact with KREEP and crustal anorthosite, and then partially melt to form Mg-suite magmas. With my current NASA Solar System Workings grant, I am further testing these ideas with new experiments designed to understand how KREEP depresses the melting point of these hybrid cumulate packages and could lead to a greater volume of crust building magmas on the Moon's nearside. 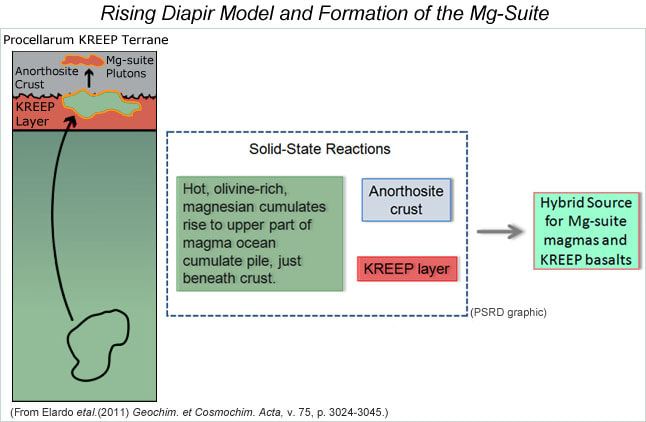 The Lunar Mantle Through Time
The Moon was very geologically active soon after its formation and differentiation, but despite its small size, its mantle continued to partially melt and form magmas  for billions of years. Crater counting suggests there are lavas on the Moon's surface as young as 1 billion years. The youngest samples we have from the Moon are three lunar meteorites that are ~3 billion years old and many models suggested that heat-producing KREEP reservoirs in the mantle were needed to create enough heat for partial melting this later in lunar history. In a series of papers, I used the geochemistry and radiogenic isotopic compositions of these meteoritic basalts, combined with high pressure, high temperature experiments to show that KREEP was not responsible for the mantle melting that formed this melts and that the lunar mantle was capable of partially melting late into lunar history.

Volatiles in Planetary Interiors
Magmatic volatiles such as fluorine, chlorine, and water are important during magmatic processes. The can affect the behavior of magmas, but their abundances and isotopic compositions can also record important information about the accretion, differentiation, and magmatic evolution of planets. In work lead by a number of long-term collaborators, we have investigated the volatiles compositions of the mantles and crusts of the Moon and Mars. One of our major findings, using the water contents of apatite in martian meteorites combined with their radiogenic isotopic compositions, is that planetary mantles incorporated and retain water and other volatiles during their high temperature accretion and differentiation.